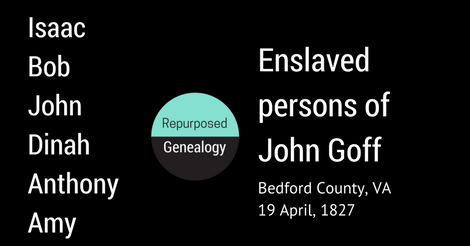 This is a topic I am passionate about and have written about it before. (There are embedded links to some of my other posts before John Goff’s will transcription.)

When you find names or information, they can be shared with The Slave Name Roll Project.

John Goff from Bedford County, Virginia did not just will his enslaved persons to his children in his will dated 19 April 1827. He willed the first born child of the enslaved woman Amy to his son Joseph Goff. Amy and any potential future children were willed to the eldest son, Benjamin Goff. It was common practice to do what was in the economic best interest of slaveholders because slaves were so valuable.

I have had a difficult time sleeping the past couple of nights since I transcribed John Goff’s will because I can’t wrap my brain around it. I have been wondering about Amy. Did she have any children? Did anyone let her know about the provisions of the will?

Unfortunately, I don’t have any other records for these families to trace what happened to them.

Isaac, Bob, John, Dinah, Anthony, and Amy, you are not forgotten.

When Your Genealogy Research Plan Changes

How to become a better genealogist

When You Find an Ancestor who Owned Slaves

Transcription of will of John Goff, Bedford County, Virginia 19 April,1827

In the name of God Amen- I John Goff of the county of Bedford be weak in body but of sound mind and disposing memory for which I thank God, and calling to mind the unsertainty of human life and living descision to dispose of all such worldly estate as is pleased God to bless me with I give and bequeath the same in manner following that is to say, I leave to my beloved wife Priscilla Goff my land whereon I now reside during her life or widowhood, at my wifes death then my land to equally divided between Benjamin Goff and Joseph Goff both my two sons. Then I also give to my son Benjamin Goff one negro boy named Isaac at my wife death- Item I also give to my son Archibald Goff the circut of land whereon he now lives to dispose of as he pleases. Item I also give to my son Leonard Goff one negro boy by the name of Bob at my wifes death. Item I also give my daughter Elizabeth Folley one negro boy named John to her and her heirs forever after my wifes death.– I also give to my daughter Nancy one negro girl named Dinah at my wife death to her and her heirs forever. Item I also give to my daughter Pricilla Goff one negro boy named Anthony after my wifes death to her and her heirs forever. Item I also give to my son John W. Goff twenty two dollars to be approved to Richard Davis. This to pay off his debt that I am bound to pay as security. Item is my son Christopher Goff also my son John Goff,  also Martha Goff, also Sally Goff, I have given all that I ever intended to give – Qincy Parker I give ten dollars at division of the stock, Nancy Goff, Pricilla Goff, Sally Machath, Benjamin Goff and equal division in stock of cattle and household furniture Item also Joseph Goff is to have Amy first child if she has one I want after my first debts is paid I want my son Benjamin Goff to have Amy and her increase after the first child if she shall have more provided that Benjamin Goff attend to the payment of my first debt at his mothers death. — I also appoint Major Thomas Swelt George Stanley my executors of this only last will and testament- Signed sealed and delivered in presents of this

At a court held for Bedford County at the Courthouse the 24th day of April 1827. A paper pertaining to the last will and testament of John Goff deceased leaving date the 19th April 1827, was proceced in Court whereupon Leonard Goff by his attorney appeared and opposed the prose of said will. On consideration whereof, It is the opinion of the Court that the said John Goff executed at the time of executing the writing aforesaid was of sound mind and memory and the said will having been passed by the oath of two souls bearing witness thereto the signing is ordered to be recorded.