A Veteran’s Decision to Serve 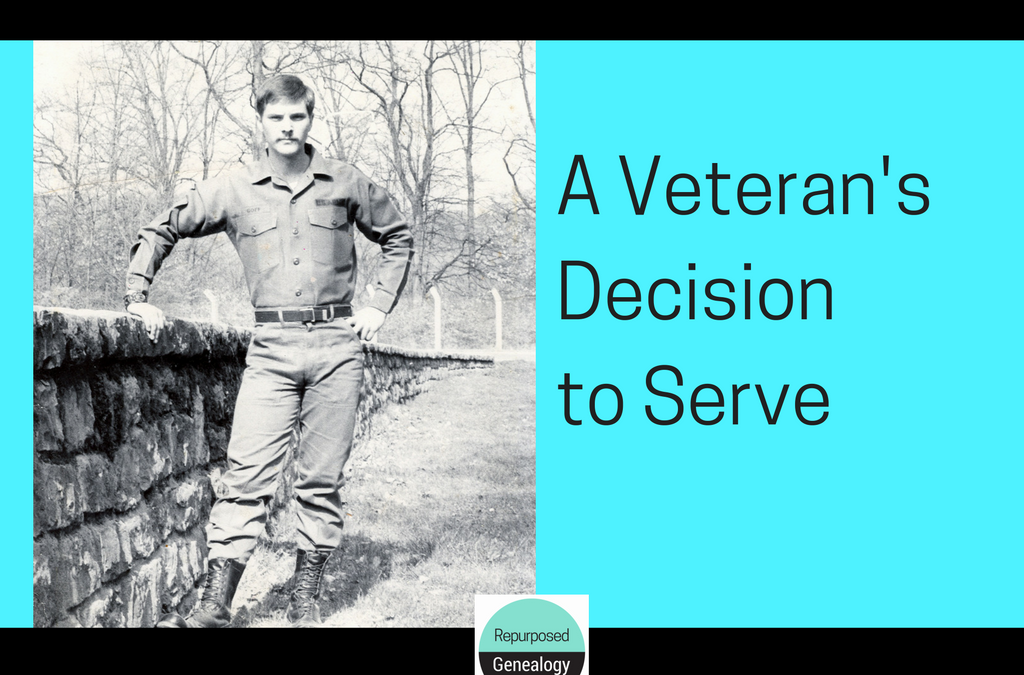 My dad sold the home he and my step-mom had lived in for over twenty five years this past spring. When we drove out to Washington for the family reunion in August for my mom’s side of the family, we took time to drive up the coast, from Olympia, to visit them in the ocean side community where they decided to retire.

After checking into the motel room they rented for us, we followed them to the beach. The boys climbed over kelp and rocks worn smooth with the water from the shifting tide. My husband showed the boys how to pick good skipping rocks, and he and my dad took turns with the rocks lighting them across the surface of the water.

He told us all to pick out a special rock to remember the day, and I spent ten minutes searching for the perfect one. My dad remembered that I like to collect a rock or shell to preserve special moments. I have a glass jar full of them. Precious moments from my life. 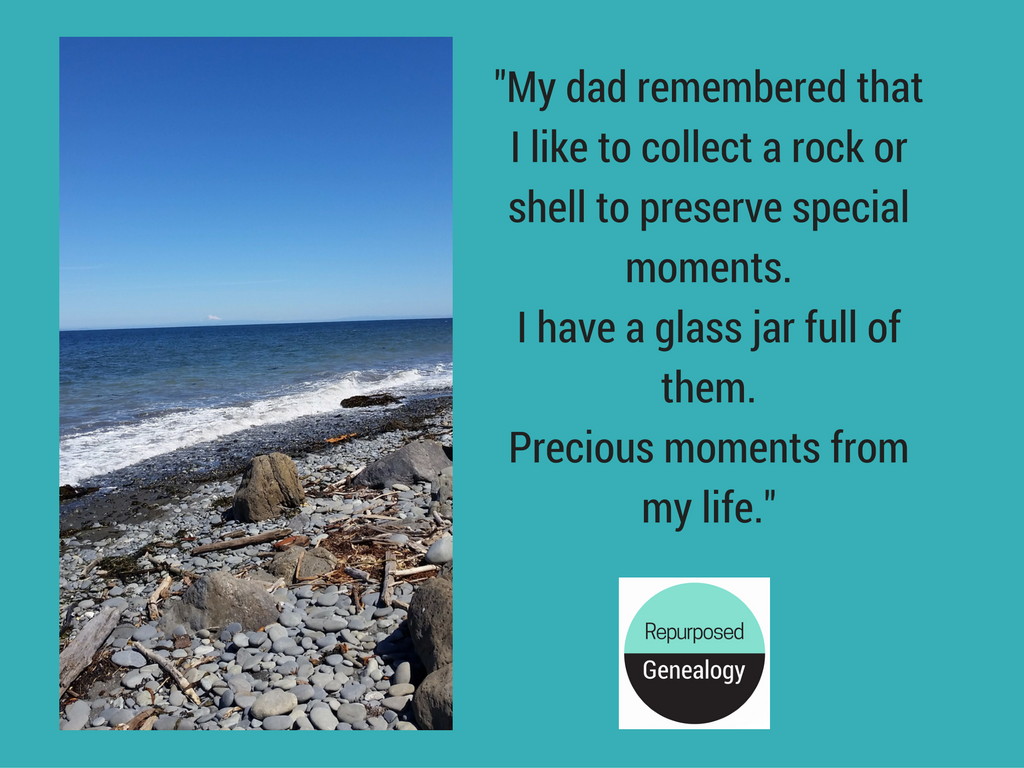 After a while, we followed them in their van to another beach. This one was a crescent shaped cove that helped protect us from the wind. The tide was out, and there were stretches of sand.  The boys ran and chased each other further down the beach with my step mom and husband following them.

He uses crutches to shift his weight and support his body. I slowed my pace to meet his as he worked his way down the path. He chose a large rock off the trail for us to sit on and watch the boys gathering drift wood in the distance.

My tendency is to fill the empty space with words when we are together, my dad and I. The words are easier for me than the silence.

The silences remind me of the gap that exists between us that I don’t really know how to fill.

After sitting for a moment, to catch his breath, and us both commenting on the beautiful view of the ocean, he turned to me. 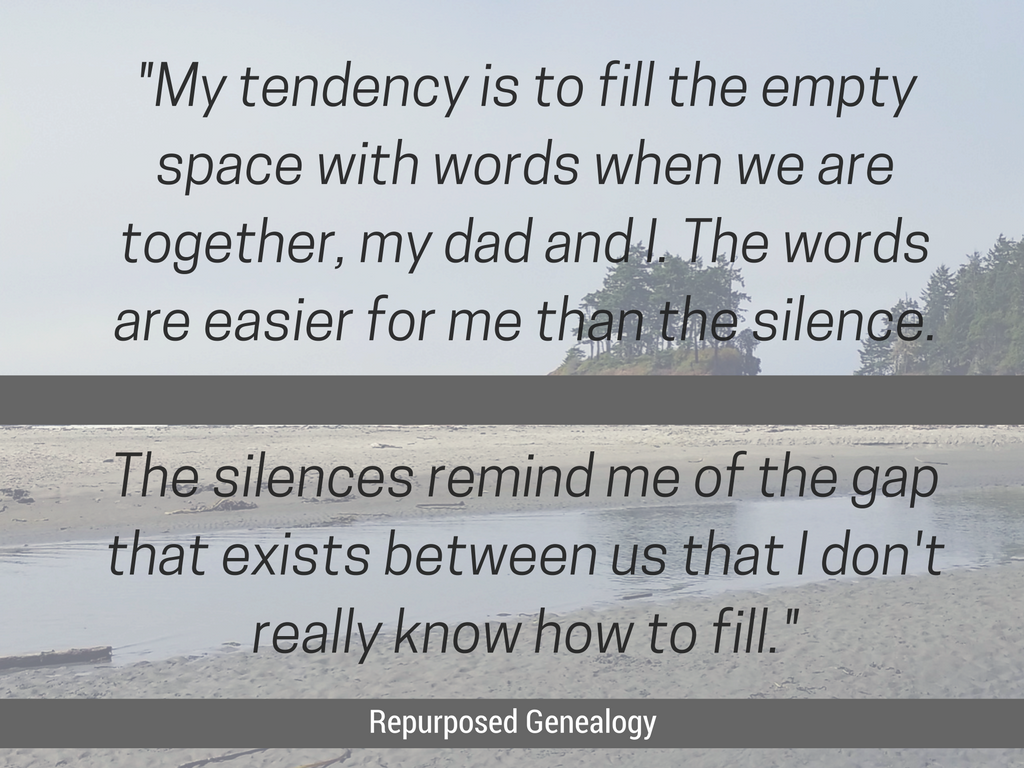 “So, I thought that since you said that you think we should talk more often about serious things, that we could do that now. I wanted to give you something. I gave your brother the old pocket watch, but I thought that you would appreciate this more than he would. Here… hold out your hand.” I willingly did, and he rested his dog tags inside in my cupped palm.

My dad has never talked much about his military service. He served at the end of the Vietnam War during a time when men who returned from military service either by enlistment or drafted service, were not treated as heroes. Those who survived physically, became casualties of a politically unpopular war.

I didn’t know that he had kept his tags. I couldn’t focus because of the tears that filled my eyes and were running down my cheeks.

He explained to me what the different things were on the chain. There was a small can opener for metal Meals Ready to Eat, a key to his foot locker, a red tag alerting people that he was allergic to penicillin. (I had never known this.) There was the silver tag with his name, number, blood type and religion Latter Day Saint. There was also a special tag which above a picture of the Salt Lake Temple, it reads, In case of need, notify LDS chaplain or member. On the back, it says, I am a member of the Church of Jesus Christ of Latter Day Saints “Mormon” .

One of the men my dad served with in Germany was a member of the Church of Jesus Christ of Latter Day Saints. My dad converted to the church shortly after he joined the army. If he had chosen a different path, and not served in the military, he may never have been baptized, my parents would never have met, at Ricks College, (which is now Brigham Young University Idaho).

I wouldn’t have been born, and neither would my brother.

With Veteran’s Day approaching, I have thought a lot about the men in my family who dedicated their time, and sacrificed to serve our country in the military.

I am thankful for my friends who have returned safely home from deployments.

None of the Veterans I know, including my father, would want to be called a hero, so I won’t call them that. Instead, I will say thank you for your decision to serve, and thank you for the freedom I have as a consequence of that decision.

Genealogy Jen’s Challenge of the Week – Thank a Veteran. Write a note, send a text or small token of gratitude. A Veteran’s decision to serve should be appreciated.