When Your Genealogy Research Plan Changes 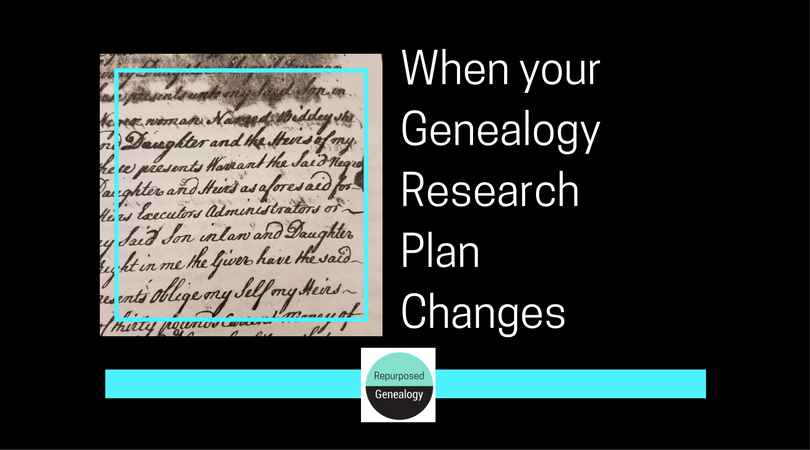 Today, I planned on scanning pictures and other documents to upload to FamilySearch for my Kohler relatives, but I felt like I needed to do something else. I have been working on having a specific genealogy research plan/ goal since I read a blog post by Amy Johnson Crow.

I had a genealogy research plan today, but I decided to ditch it, because felt like I needed to find something important.

Even after I ran on my treadmill and showered this morning, I felt unsettled.

After thinking and praying about how to focus my time, I felt impressed to organize copies of wills I inherited from my great uncle Max Goff.

After about 30 minutes, I knew what I had been looking for.

Above a property transaction recorded on page 42 of a deed book for Henrico County, Virginia where my one of my Trent ancestor’s land transactions was recorded, I noticed another record. It contained the name of the enslaved woman Biddy.

I have transcribed the document below. I urge you all to review your family documents for the names of enslaved persons. Sometimes, names may be included in adjacent documents to your family, if they aren’t in your own family records.

When you find these people, you can share the information with Schalene  so the descendants of the enslaved can find their ancestors. You can contact her through her blog Tangled Roots and Trees to participate in the Slave Name Roll Project.

If you are nervous about sharing that information, I understand.

She offers an option to do it anonymously if you don’t want to be associated with the en slavers you find.

If you need more inspiration to address this tender topic, please read what I wrote last year When you find an ancestor who owned slaves.

I encourage you to embrace the turn. What you may discover or learn could be infinitely more important than sticking with your plan.

Transcription of bill of sale from Charity Ballenger of Goochland, County

At Court held for Henrico County the first Monday in July 1745 this deed from Charity Ballenger to John Freeman was ptoved by David Staples and Holman Freeman tow of the witnesses therto and was ordered to be recorded adn to be continued in the clerk’s office for further proof.

At a court held for Henrico, County the first Monday in August 1745 This deed was further proved by Jane Easley the other witness of to be the act and deed of Charity Ballenger which was ordered to be certified. Test. Bowlor Cockett